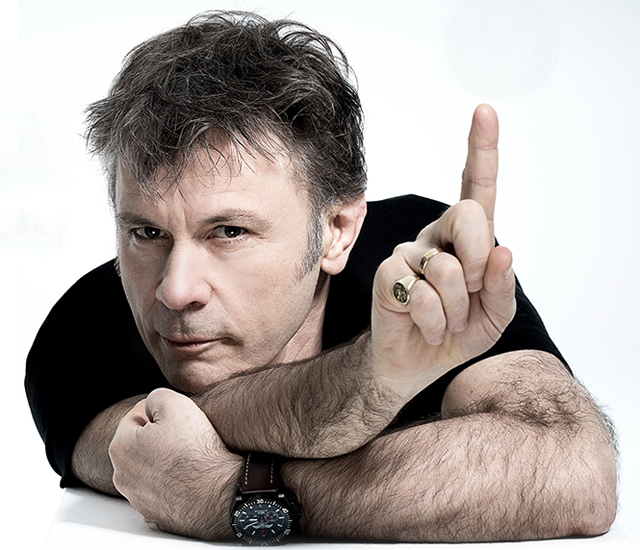 This is a biography Paul Bruce Dickinson was born in Nottinghamshire, in Worksop (England), on 7 Augustborn in 1958, son of a shoe shop assistant and a mechanic of the army. After spending the first years of life with the grandparents (the grandfather, dancer tap, made him listen to the music of Chubby Checker, Beatles, and Gerry & the pacemakers), moves with the rest of the family to Sheffield.

At thirteen Bruce, disobeying his parents, moves to Northampton, to boarding school, but the period of adolescence is not the happiest, thanks to the numerous jokes that he is forced to suffer to operate on his classmates and older students. Not having a chance to watch TV, Bruce in college listens to a lot of music, and is struck by “Child in time”, by Deep Purple: the members of the band immediately become his idols, and the first album the boy buys with his money is”In rock”.

Eager to imitate drummer Ian Paice, he starts playing two bongos from the hall music, and slowly increases their self-esteem and confidence in their means, going up on stage on the occasion of several theatrical performances. One day while sings “Let It Be” together with a friend, realizes he can reach even the higher notes with extreme ease, and to be in possession of uncommon singing skills: so he takes into consideration the idea of ​​starting to sing in some band.

In 1976 he joined the first group, the Styx: the members of the band they are immediately entranced by his talents. The complex, however, dissolves shortly later, and so the young Bruce Dickinson, once he finished his studies, embarked on a career military. His life in the army, however, lasts just two weeks: that is not an environment that suits him, much better to go back to university.

Enrolled at Queen’s Mary College in London at the Faculty of History, he joined the band by Speed, a group that plays all kinds of music at an uncommon speed: in practice, speed metal ten years in advance. The fate of the Speed ​​is not very lucky, and so Bruce, who in the meantime has learned to play the guitar, enters in the Shots.

Dickinson’s talents at the microphone are evident: not only when he sings, but also when he “interviews” people from the audience during concerts. Bruce, he is then noticed by Barry Graham and Paul Samson, who want him in Samsons, a group that at the time performed in the most important clubs in London. Not only that: Samsonsthey has already produced an album, called “Survivors”, which has won over numerous positive reviews from critics.

The opportunity, therefore, is one not to be lost, and so Bruce Dickinson, once his exams are completed, decides to devote himself completely to music.The relationships with the other members of the band, however, are not the best, also due to the recurring use of drugs that they do. Soon, therefore, their ambitions collide, but Bruce, in order to become a professional rocker, agrees to start smoking and consuming narcotics.

After making the “Headon “and” Shock Tactics “, the band in 1981 discovers that the record label that produces them is about to go bankrupt, and cannot pay for the numerous concerts already performed. Obstacles don’t end here: Graham leaves the band during the tour that follows “Shock Tactics”, and this place soon comes from Mel Gaynor, who despite being a decided drummer laid (he will play later also for Simple Minds) turns out to be totally unsuitable for Samson (too precise and, paradoxically, too clean).

Bruce Dickinson decides to leave the group, thanks to the will of the other members to focus more on blues than on rock: his last concert with Samsons goes on stage in 1981 at the Reading Festival. Spectators of that concert are, among others, RodSmallwood and Steve Harris of Iron Maiden are looking for a new singer: Dickinson was immediately called to replace the vocalist Paul Di’Anno.

In 1982 “The Number of the Beast” was recorded, the third album by Iron Maiden she consecrates the group on a planetary level. Then it’s the turn of “Peace of Mind” and “Powerslave”, where Bruce Dickinson, nicknamed “Air raid siren”, showcases all his vocal and behavioral skills, as happens in “Live After Death”, double-disc from life. Pieces like “Rime of the Ancient Mariner”, “Flight of Icarus” and “Hallowed be thy name “are complex and fantastic at the same time, signs of a singing class difficult to reach.

Until 1986, Iron Maiden produced five full metal albums. Dickinson would like to change his style, and offers several folk-inspired songs not far off from the style of Jethro Tull: his proposals, however, are rejected, and the new album, “Somewhere in Time” features very few contributions from Bruce.

Different, however, the fate of “Seventh Son of a Seventh Son”, a more alternative album that satisfies the will of all members, and which gives life to refined atmospheres thanks also to the use of samples and keyboards.Then in 1990 Dickinson gave birth to his first solo album, made together with guitarist Janick Gers.

Also from the same period are “Bring your Daughter to the Slaughter “, which is part of the soundtrack of the film” Nightmare 5 “, and the book humorous “The adventures of Lord Iffy Boatrace”. The writing career will continue then with “The missionary position”, published in 1992: a volume that demonstrates Dickinson’s eclecticism, also exemplified by his ability to fly airplanes, from his degrees in literature and history and his ability to fencing.

Paradoxically, his career as a singer is being penalized right now, also because “No Prayer for the Dying”, Maiden’s eighth album, is considered a step back of the group. A partial redemption comes with “Fear of the Dark”, but by now the history with the group is compromised: and so is Dickinson, after the tour, they come from treat “A Real Live One” and “A Real Dead One”, leaves the band, with whom he sold something like 50 million albums around the world.

Replaced by Blaze Bayley in Maiden, Bruce continues his career as a soloist with”Ball to Picasso “, released in 1994 and written with the collaboration of Roy Z: of this album, the song “Tears of the Dragon” is also part. “Skunkworks”, in 1996, evokes grunge sounds, while the experiments end with “Accident of Birth “, from 1997, and” Chemical Wedding “, from 1998, two records that mark a decisive moment return to metal, thanks also to the presence of Roy Z and Adrian Smith, former Iron Maiden: folk and heavy metal marry in a perfectly successful marriage, perhaps unrepeatable.

Dickinson decides to return with Iron Maiden, which they have released in the meantime”The X Factor” and “Virtual XI”, not before having recorded “Scream for me Brazil”, live recorded in 1999 in Sao Paulo. In the summer of that year, the Maiden leaves with Bruce for the tour aimed at promoting “Ed Hunter”, the video game that precedes the release of “Brave New World”.

The next three discs are “Dance of Death”, “A Matter of Life and Death” and “The final frontier “. In the meantime,” The Best of Dickinson “was released in 2002, which collects the best of his career. In 2005, however, “Tyranny of Souls” exalts fans and professionals, as the emblem and receptacle of the infinite talent of the English singer.

In addition to the singing career, Bruce Dickinson is engaged in aviation, being captain of the Aestreus airline. Among the other flights he guided (interest in the planes comes from an uncle who had been part of the RAF), even what he has brought Liverpool to Naples for the Europa League match in October 2010.

Also worth mentioning is the film “Flight 666” which documents the “Somewhere Back inTime World Tour “of 2008 and includes, in addition to images of the concerts and the backstage, of the shots taken around the globe aboard the famous “Ed ForceOne “, plane driven by Bruce Dickinson, 23 concerts in 13 different states around the globe that registered the “sold out”