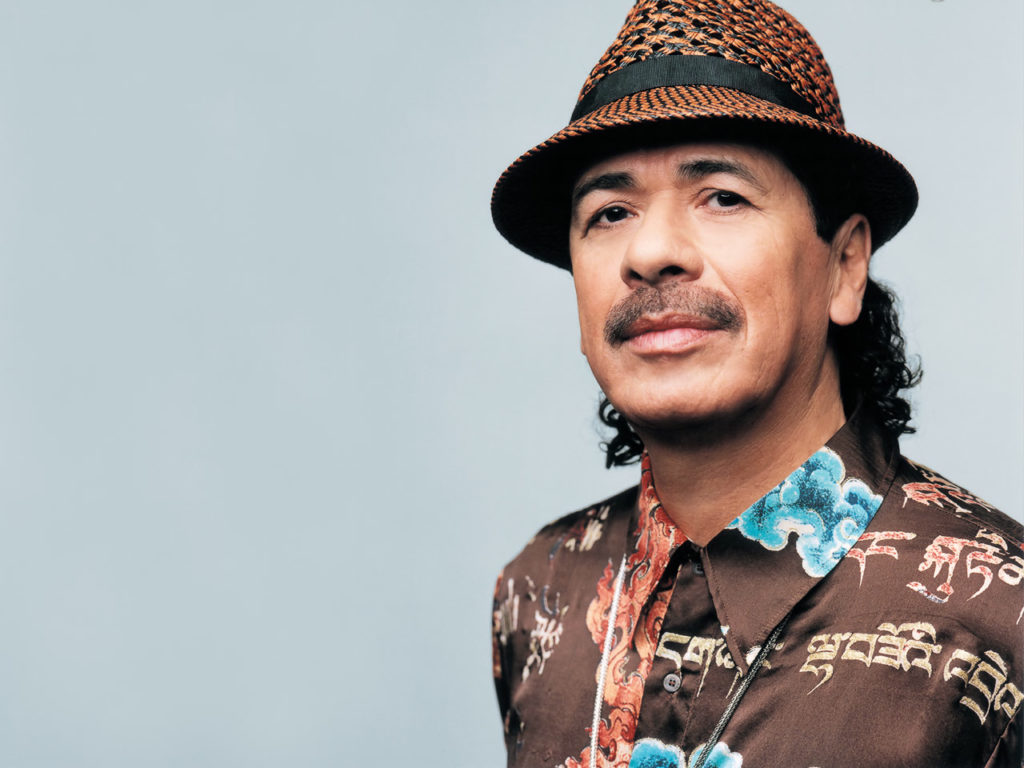 This is the biography Carlos Santana was born on July 20, 1947 in Autlan de Navarro, Mexico. Passionfor music he is immediately infused, thanks to his father who, being a “mariachi”,or rather a wandering player, he cradles him to the sound of sweet and melancholy melodies.

In later, alongside his father in his shows, the first instrument he embraces is nota guitar but a violin. Perhaps it is to this matrix that his love for long notes e can be traced backheld, sighed and sung, so characteristic of his style and that they are hisunmistakable distinctive brand, a style that makes it unique among all guitaristselectrical.After the violin, therefore, the guitar , easier to handle, less delicate and moresuitable for the popular repertoire, but above all for the new genre that was emergingin the world: rock.

Having a steady and regular job does not even cross his mind, a condition now unthinkable and virtually unbearable for someone like him who grew up in the shade of a stray father. Carlos instead finds the opportunity to perform in Tijuana clubs, a country in Mexico with enough souls to ensure a good one circulation of customers.

In the 1960s, the family moved to San Francisco, where the very young musician he comes into contact with different styles that influence his aptitude for mixing “genres”.In 1966 the “Santana Blues Band” begins to gain some popularity in the club circuits, but not only. Strong from this starting point, he manages to snatch the first record deal, the one thanks to which the powerful “Santana” comes out, which, before muted and then gradually increasing, manages to sell a considerable quantity of copies, until it went platinum.

out a role as

Important collaborations begin to flood: in 1968, for example, he takes part in a recording project with Al Kooper in which Santana carves out a role as protagonist. Having now become a “name”, he is a candidate in the shortlist of possible stars who will have to participate in one of the greatest musical events of the century, the famous kermesse of Woodstock , three days of peace, love and music (and even drugs, to be honest), thatit will attract half a million people.

It’s 1969: Santana goes wild on stage and offers one of the most exciting performances in this career. The audience goes into a frenzy: Santana has managed to impose her blend of rock and South American rhythms that gives life to the so-called “Latin rock”.Even the mystical and religious component is not negligible in its production. starting from the 70s the musician pursues a musical path without setbackspermeated with mystical elements and sound research. In those years “Abraxas” came out which, driven by legendary songs such as “Black magic woman”, “Oye Como VA” and “Samba pati “, ranks at number one in the US for five straight weeks.

The following year “Santana III” (perhaps his absolute masterpiece) comes out, which remains a number 1 in the US for a month and a half. The musician takes one of several”vacation” from the group for a live record with drummer Buddy Miles, what not also infrequent later on. However, discomforts soon emerge.

There overlap between the events of the group and solo career begins to become problematic. On the stylistic level, a profound change in style emerges, so much so that the fourth album”Caravanserai” resembles a long, vaguely jazzy suite, which is inducing some of the most “rocking” collaborators of the moment to leave the group for found Journey.

Santana meanwhile deepens more and more his interests towards the spirituality, and together with fellow believers John McLaughlin (the two share the same guru), realizes an album inspired by these themes, “Love Devotion and surrender “.Santana’s career is a continuous swing between fusion projects with friends like Herbie Hancock and Wayne Shorter and more orthodox rock, the one preferred by the public.

In the 80s other recordings with prestigious guests see the light, a tour with Bob Dylan, and the soundtrack of ” La Bamba”(1986).In 1993 he founded his own label, Guts, and Grace, while in 1994 he returned symbolically in Woodstock for the 25th anniversary of the festival that launched it; moreover, it affects”Brothers” with his brother Jorge and nephew Carlos.

In 1999, with more than 30 behind millions of records sold, the record company changes, and with some prestigious guests coming from the hip-hop field he records “Supernatural” (Arista label), an amazing one success that leads him to win the Grammy Award. A prestigious award, not there is no doubt, even if, for the ancient fans, the old guitarist seems now unrecognizable and irremediably prone to the needs and strategies of industry”commercial”.His latest works are “Shaman” (2002) and “All that I Am” (2005), full of excellent music and illustrious guests.