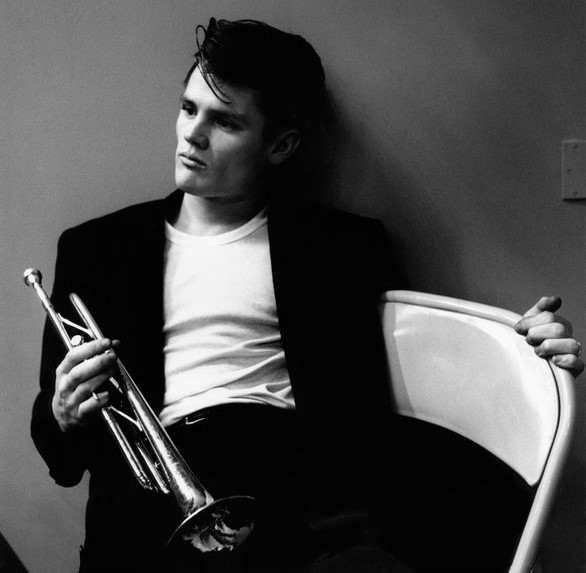 Chet Baker, born in Yale on December 23, 1929. He was one of the greatest trumpet players in the history of jazz music, without a shadow of a doubt the best among whites, second, perhaps, only to his colleague Miles Davis. A singer with a more than singular vocal timbre, he linked his name to the famous song “My funny Valentine”, an old jazz standard that suddenly rose to the Olympus of the great compositions of twentieth century music following his amazing interpretation.Chet Baker is considered the reference point of the jazz style called “cool jazz”, born between the 50s and 60s.

A drug addict for over thirty years, he spent several moments of his life both in prison and in some detoxification institutions.What shakes little Henry Junior up, from the point of view of musical inspiration, is his father, an amateur guitarist who dreams of a future in the world of music. In fact, when Chet is only thirteen years old, he receives a trombone as a gift from his father, but despite his efforts, he cannot play in any way.

He turns back on a trumpet, which from that moment on becomes the little Baker’s life and travel companion.It was during this period that his family moved to California, to the town of Glendale. Here the little trumpeter plays for the school band, but he also has to help out at home, as his family is not particularly well-off. After finishing his lessons he works in a bowling alley as a bowling pin collector. In 1946 he joined the army and was sent to Berlin.

Here his occupation is almost exclusively as a musician in his own regiment’s band, but within a handful of years, and as a result of some of his behaviour not exactly in line with military style, which earned him some unfavourable psychiatric tests, he was discharged and declared unfit for a full-time life in the US army.In the early 1950s Chet returns home determined to do the only thing he is good at: playing the trumpet. A couple of years go by and on 2 September 1952 the trumpeter meets up in San Francisco for the recording of one of his first records, in the company of another great musician of the time, the saxophonist Gerry Mulligan.

On that very day, in the recording room, one realises that a ballad is missing from the list of songs, at which point the double bass player Carson Smith proposes the song that would become Chet Baker’s workhorse: “My funny Valentine”.Moreover, at the time, this was a ballad that nobody had recorded yet and it was an old song from the ’30s, signed by Rodgers and Hart, two well-known authors in the field, but certainly not thanks to “My funny Valentine”.

When Baker recorded it, for that 1952 album, the song became a classic and that recording, the first of hundreds and hundreds of versions, will remain forever the best of the legendary trumpet player’s repertoire.

Anyway, on the strength of the recording of the album, after a few months the jazzman receives the call from Dick Bock, from Los Angeles. Number one on the World Pacific Records label wants him to audition with Charlie Parker at the Tiffany Club.

After only two tracks, “Bird”, as he is nicknamed the greatest saxophonist ever, decides that the 22-year-old Chet Baker can join his ensemble and takes him with him.
After the tour with Parker, Baker gets busy with Mulligan’s quartet, in a not very long but nevertheless intense and interesting musical experience. The two, together, make time to give life to the white version of cool jazz, called “West Coast sound” in those years.

Unfortunately, however, due to the drug problems that also gripped Mulligan, the formation had to break up almost immediately. These were the strongest years of the Yale musician’s life when he recorded several albums with World Pacific Records and, at the same time, began his life as a heroin addict.

He was able to give life to his own jazz formation in which he also began to sing, inventing from nothing a sound that until then had been unheard on the contemporary scene, intimate, profoundly cool, as one would have said, and suffused like his own trumpet solos.

In early 1955 Chat Baker was named the best trumpeter in America. In the “Downbeat” magazine’s poll, he takes his pursuers by a wide margin, finishing first with 882 votes, ahead of Dizzy Gillespie, second with 661 votes, Miles Davis (128) and Clifford Brown (89). That year, however, his quartet also broke up and his troubles with justice began, again because of the heroine.

He moves to Europe where he moves between Italy and France above all. He meets his future wife, the English model Carol Jackson, with whom he will have three children. However, Chet Baker has to fight against his drug addiction, which also causes him many legal problems, as it happens in the early 60s, when he is arrested in Tuscany.

He has to spend over a year in Lucca prison. Later, he suffers the same fate in West Germany, Berlin and England. In 1966 Baker leaves the scene. The official cause is the severe pain he has to endure because of his front teeth, which he decides to have extracted. Many, however, argue that the trumpeter lost his front teeth due to some settling of accounts, for reasons related to the payment of heroin, the use and abuse of which had already damaged his teeth.

We certainly know that, after a few years of anonymity and when nothing more is known about him, it is a jazz enthusiast who finds him while Chet works as a gas station attendant, offering him the chance to get back on his feet, even finding the money to fix his mouth. From that moment on, Chet Baker has to learn how to play the trumpet with his dentures, also changing his musical style.

In 1964, partially detoxified, the jazzman returned to the USA, to New York. It was the time of the “british invasion”, rock rages and Chet has to adapt. Anyway, he makes some interesting records with other renowned musicians, such as the great guitarist Jim Hall, witnessed by the very good work entitled “Concierto”. But soon he gets tired of the USA again and returns to Europe, beginning to collaborate with the English artist Elvis Costello.

During this period the trumpeter went back and forth with the city of Amsterdam, in order to better experience the abuse of heroin and drugs in general, thanks to the more permissive Dutch laws. At the same time he frequented Italy, where he performed many of his best concerts, often alongside the Italian flutist Nicola Stilo, a discovery of his own. He also starred in several Italian films, called in by directors such as Nanni Loy, Lucio Fulci, Enzo Nasso and Elio Petri.

Since 1975 he has resided almost exclusively in Italy, with sometimes devastating repercussions in heroin. There are many who saw him in Rome, in the Monte Mario district, begging for money for a dose of heroin at the beginning of the 80s. In addition to these falls, when he is in more decent conditions, he alternates, always in this period, street performances with his trumpet, in Via del Corso, unfortunately for him always to scrape together money to spend to satisfy his drug addiction.

On April 28th 1988 Chet Baker held his last memorable concert in Hannover, Germany. It is an event dedicated to him: there is an orchestra of over sixty elements waiting for him for the five days of rehearsals preceding the concert evening, but he never shows up. However, on the 28th he goes on stage and gives one of his best performances ever.

Above all he plays, critics say, the best version of his “My funny Valentine”, lasting over 9 minutes: an unforgettable long version. After the concert, the trumpeter never shows up again.At ten past three in the morning on Friday 13 May 1988 Chet Baker is found dead on the pavement of the Prins Hendrik Hotel in Amsterdam. When the police find the body, without identification, they initially trace the body back to a thirty-nine year old man.

Only later would they establish that the corpse was to be attributed to the well-known trumpeter, who died at the age of fifty-nine. Baker was buried the following 21 May in Inglewood, USA. A certain mystery has always hovered over his death, however, given the circumstances never clearly defined.

Chet Baker Sings It Could Happen to You (1958) (Riverside/OJC)

Somewhere over the Rainbow (1962) (Bluebird)

Once upon a Summertime (1977) (Original Jazz Classics)

Someday My Prince Will Come (1979) (SteepleChase)