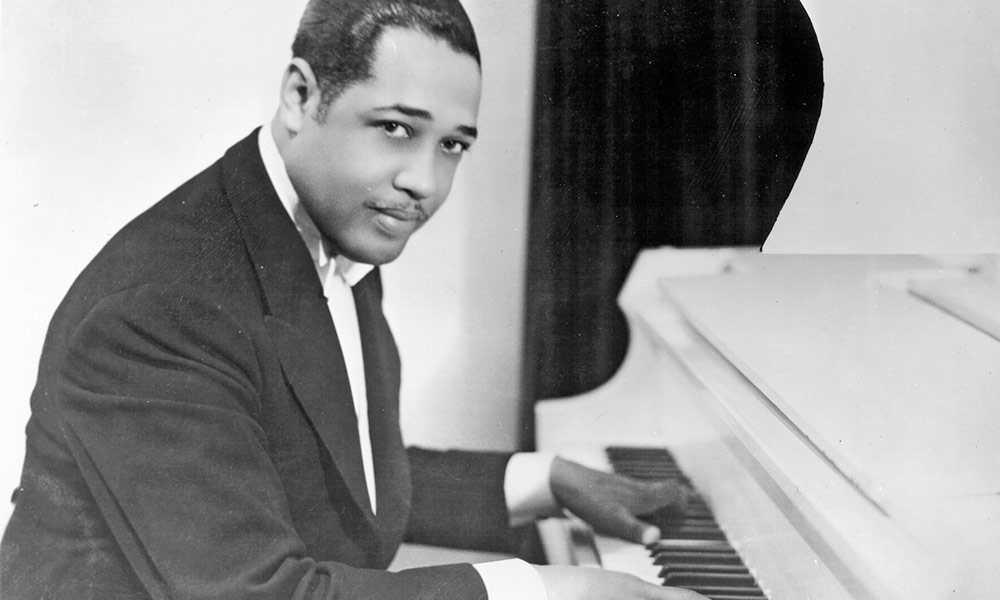 This is Biography Duke Ellington (whose real name is Edward Kennedy) was born on 29 April 1899 in Washington. He began playing professionally in his teens as a pianist in his hometown in the 1910s. After a few years of playing in dance halls with Otto Hardwick and Sonny Greer, he moved to New York in 1922, thanks to the latter, to play with Wilbur Sweatman’s band; the following year, he was hired by Snowden’s Novelty Orchestra, which included, in addition to Hardwick and Greer, Elmer Snowden, Roland Smith, Bubber Miley, Arthur Whetsol and John Anderson. He became the leader of the band in 1924 and got a contract with the ‘Cotton Club’, the most famous club in Harlem.

Shortly afterwards, the orchestra, which in the meantime had taken the name ‘Washingtonians’, was joined by Barney Bigard on clarinet, Wellman Braud on double bass, Louis Metcalf on trumpet and Harry Carney and Johnny Hodges on saxophone. Duke’s first masterpieces date back to those years, between pseudo-African shows (‘The mooche’, ‘Black and tan fantasy’) and more intimate and atmospheric pieces (‘Mood Indigo’).

Success was not long in coming, not least because the jungle proved particularly popular with the whites. After welcoming Juan Tizol, Rex Stewart, Cootie Williams and Lawrence Brown into the group, Ellington also called in Jimmy Blanton, who revolutionised the technique of his instrument, the double bass, elevated to the rank of soloist, like a piano or trumpet.

At the end of the 1930s, Duke accepted the collaboration of Billy Strayhorn, arranger and pianist: he became his trusted man, even his musical alter ego, also in terms of composition. Among the works that came to light between 1940 and 1943 are “Concerto for Cootie”, “Cotton Tail”, “Jack the Bear” and “Harlem Air Shaft”: these are masterpieces that can hardly be labelled, as they go beyond well-defined interpretative schemes. Ellington himself, when talking about his songs, refers to musical paintings and his ability to paint through sounds (not surprisingly, before embarking on his musical career, he had shown an interest in painting and wanted to become a billboard artist).

From 1943, the musician gave concerts at “Carnegie Hall”, the sacred temple of a certain kind of cultured music: in those years, moreover, the group (which had remained united for many years) lost some pieces such as Greer (who had to deal with alcohol problems), Bigard and Webster. After a period of tarnish in the early fifties, corresponding to the exit of saxophonist Johnny Hodges and trombonist Lawrence Brown, great success returned with the 1956 performance at the Newport Jazz Festival, with the performance of ‘Diminuendo in Blue’, among others.

This song, together with “Jeep’s Blues” and “Crescendo in Blue”, is the only live recording of the album, released in the summer of that year, “Ellington at Newport”, which contains many other tracks that are declared “live” even though they were recorded in the studio and mixed with fake applause (only in 1998 the complete concert will be published, in the double disc “Ellington at Newport – Complete”), thanks to the accidental discovery of the tapes of that evening by the radio station “The Voice of America”.

From the 1960s onwards, Duke was always travelling the world, busy with tours, concerts and new recordings: among others, the 1958 suite “Such sweet thunder”, inspired by William Shakespeare; the 1966 “Far East suite”; and the 1970 “New Orleans suite”. Previously, on 31 May 1967, the Washington musician had interrupted the tour in which he was engaged following the death of Billy Strayhorn, his collaborator and close friend, due to cancer of the oesophagus: for twenty days, Duke never left his bedroom.

Having overcome his period of depression (he had refused to give concerts for three months), Ellington returned to work with the recording of “And His Mother Called Him”, a famous album that included some of his friend’s most famous scores. After the “Second Sacred Concert”, recorded with Swedish performer Alice Babs, Ellington had to deal with another sad event: during a dental session, Johnny Hodges died of a heart attack on 11 May 1970.

After having welcomed into his orchestra, among others, Buster Cooper on trombone, Rufus Jones on drums, Joe Benjamin on double bass and Fred Stone on flugelhorn, Duke Ellington was awarded an Honorary Doctorate Degree by the Berklee College of Music in 1971 and an Honorary Degree in Music by Columbia University in 1973; He died in New York on 24 May 1974 of lung cancer, alongside his son Mercer, just a few days after the death (unbeknownst to him) of Paul Gonsalves, his trusted collaborator, who had died of a heroin overdose.

A conductor, composer and pianist, winner of a Grammy Lifetime Achievement Award and a Grammy Trustees Award, Ellington was named ‘Presidential Medal of Freedom’ in 1969 and ‘Knight of the Legion of Honour’ four years later. Unanimously considered one of the most important American composers of his century and one of the most significant in the history of jazz, he has also touched on genres as diverse as classical music, gospel and the blues throughout his more than 60-year career.