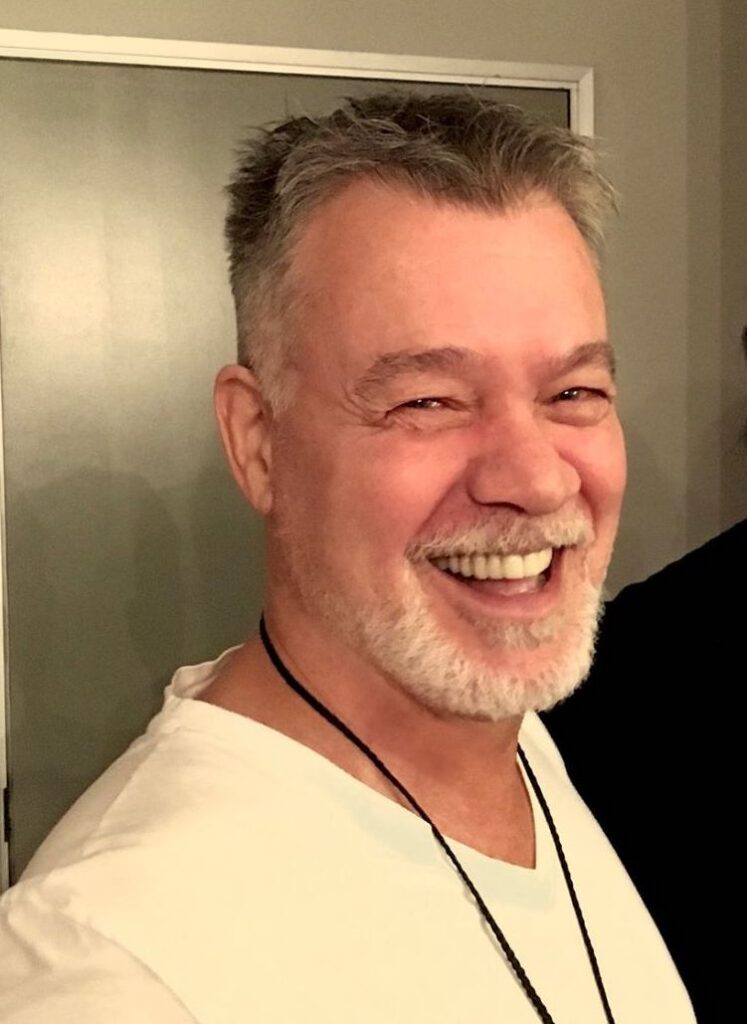 This is Biography Edward Lodewijk, known as Eddie van Halen, was born in Amsterdam on 26 January 1955. Dutch guitarist and composer, later adopted by the United States, he was the leader of the historic rock band of the same name, defined as one of the greatest ever. His name is associated with the guitar technique of ‘tapping’, which Eddie is said to have invented. In fact, the good guitarist perfected it, making it a fundamental part of rock in general and of all those guitar solos that are commonly called “rock”, “hard rock” and “heavy metal”, giving the “number”, so to speak, also harmonic foundations.

In the van Halen family, music is more than just a hobby. Ever since Nijmegen, the city in the Netherlands where little Eddie lived until the age of seven, various instruments have been played in their house. His father, who practically raises all his children by himself, is a good jazz musician. The future leader of Van Halen started with the piano, then moved on to the drums, but it was at the age of twelve that he found his great love: the guitar. It was his older brother Alex who gave him the guitar. When he formed his first band, he switched to the drums, while Van Halen’s third son worked as a technician.

In 1962 they moved to the USA, to Pasadena. The future Van Halen brothers learned a lot from bands like The Beatles and Led Zeppelin. However, Eddie was inspired by Eric Clapton’s Cream and, above all, by the playing of another guitar great, Jimmy Page. It is said that the guitarist of the future Van Halen ‘created’ tapping, so to speak, while studying one of Page’s songs. Not being able to make it his own, he would start tapping with both hands on the guitar fretboard, resulting in the series of wide, feverish intervals that the Dutch musician is said to have invented.

In truth, as already mentioned, examples of tapping, albeit in a different form, can already be found in the 19th century, such as in Capriccio No. 24 by the great Niccolò Paganini. Barney Kessel, an extraordinary jazz musician, gives an example in some of his live performances from the 1960s. Genesis guitarist Steve Hackett would have done the same in ‘Dancing With The Moonlit Knight’.

However, it was only around 1975, after meeting bassist Michael Anthony and singer David Lee Roth, that a real band was born. At the beginning, they were called “Mammoth”, but it was only later, when they signed their first contract, that they gave themselves the name “Van Halen”. They were discovered by Kiss bassist Gene Simmons, who put them in touch with the famous Warner label. In 1978, their first album was released, which is still the best in the band’s history.

It was simply entitled “Van Halen”, and contained some of the songs that made guitarist Eddie famous, such as “Eruption”, in which tapping was king, instant success. The innovative style, Eddie’s talent and the great frontman skills of Roth, charismatic and a real stage animal, proved to be successful.

The following year they released the album ‘II’, which contained the hit single ‘Dance the night away’, and in 1980 they released their less commercial but very experimental album ‘Women and children First’. In 1981 Eddie Van Halen married actress Valerie Bertinelli, with whom he had a son in 1991, whom he named Wolfgang in honour of the great Austrian composer Mozart.

In 1983, confirming their success, Van Halen earned an entry in the Guinness Book of Records for the highest paid appearance in history (at least until the 1990s). At the US Festival, Van Halen’s cachet was $1 million. That same year, however, Warner’s producer and Eddie quarrelled and decided to split up. The guitarist and leader of the band wanted more independence in the composition and created the “5150 Studios”, where all the other Van Halen albums were produced. The choice proved to be the right one and in 1984 the album “1984” was released, the only one able to come close to the success of their debut album. Here, Eddie also played keyboards and their single, “Jump”, soon topped the charts.

At the height of their success, however, singer Dave “Diamond” Roth left the band to pursue a solo career. In 1985, the choice of the new singer fell on Sammy Hagar, coming from Montrose. The new partnership lasted eleven years. Their first album of this period was named after the newborn studios: ‘5150’, dated 1986. It was the best-selling album of the Hagar era and also the first album to reach number one in the charts, at least in the US.

1988’s “Why Can’t This Be Love, OU812” and “When It’s Love” came out, but it wasn’t until 1991’s “For Unlawful Carnal Knowledge” that the band got back on top. This album is the only one that allows Eddie Van Halen’s band to win awards, such as the “Grammy Award” for the best Hard Rock album of the year, as well as the best video given by MTV for the single “Right Now”. Their only live album also dates from this period.

In 1996 came a new change. While the band recorded the soundtrack for the film ‘Twister’, singer Sammy Hagar was excluded from the work. Two years later, Gary Cherone from Extreme was chosen. The choice did not turn out to be a winning one. The experimental album “Van Halen 3” dissatisfied the fans, selling less than the previous ones. Shortly after, the band broke up after a concert in Hawaii, also due to Edward Van Halen’s health problems.

It soon became clear that without a great frontman, the road back to the top was quite hard. So in 1996, the band tried to get back its historical singer, David Lee Roth, who returned with his vocal contribution, appearing in two tracks of the collection “The Best of Van Halen, Vol. 1”. But the quarrels started again and the band couldn’t get back together.

Several years went by, until they tried again with Hagar, who was called back in 2003 for the album ‘The Best of Both Worlds’, a collection of hits with the addition of three new songs with Hagar on vocals.

It seemed the right way to go, and the 2004 tour, with Hagar at the forefront, proved successful, bringing in over $55 million to the band’s coffers. However, it was during these years that Eddie began to have serious problems with alcohol, which also led to Hagar’s eventual departure from the scene.

In 2006, bassist Michael Anthony was kicked out of the band. He was replaced by Eddie’s son Wolfgang Van Halen. Inducted into the Hall of Fame in 2007, Van Halen announced that the band’s leader was in a rehabilitation centre for alcohol addiction. That same year, the guitarist and his wife divorced for good.

Van Halen is one of the five rock bands ever to have released more than one studio album that has sold over 10 million copies in the USA. While Eddie Van Halen is considered by Rolling Stone magazine (in 2010) to be in the number 70 position, in a ranking of 100 of the best guitarists in history. In addition, the historic newspaper declared the band’s debut album of the same name among the best 500 of all time,battling throat cancer for over a decade, Eddie Van Halen died on 6 October 2020 at the age of 65, in Santa Monica (California, USA).