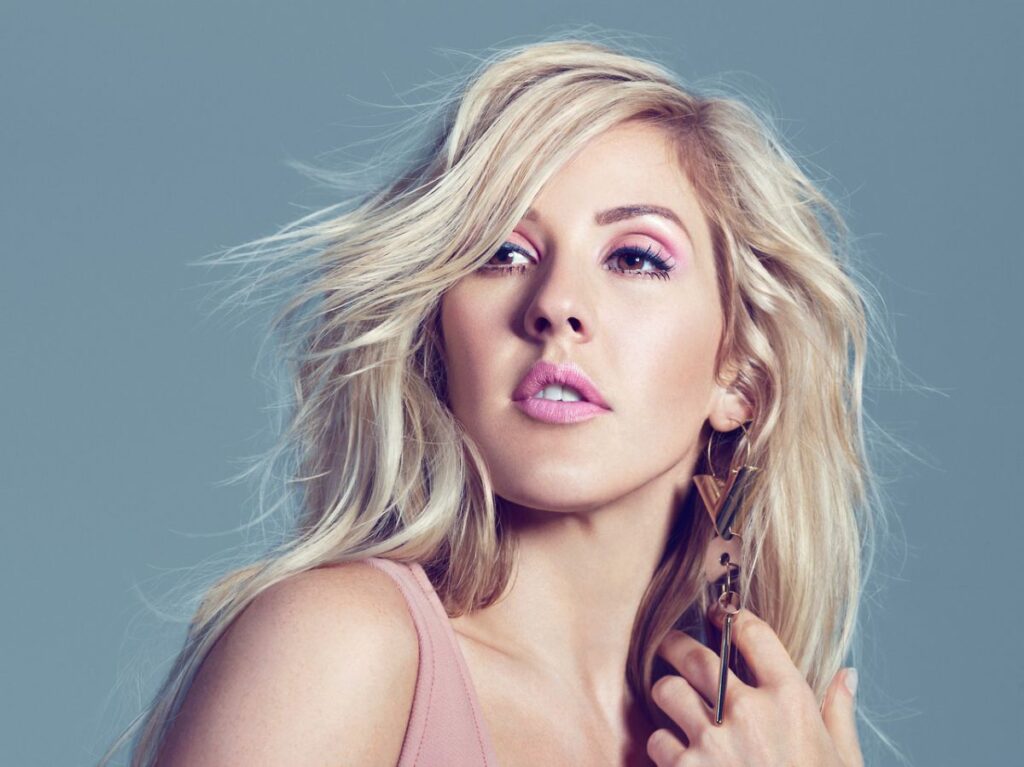 This is Biography Ellie Goulding (full name is Elena Jane Goulding) was born in Hereford, England, on 30 December 1986. The second of four children, she grew up in Lyonshall, a small town near Kington. Her mother Tracey Clark worked in a supermarket, and her father, Arthur Goulding, came from a family of undertakers. The parents separated when Ellie was only five years old. At the age of nine she started playing the clarinet and at fourteen the classical guitar.

At fifteen she began writing songs and won a singing competition in her college years. After attending drama and politics classes at the University of Kent, she came into contact with electronic music and was discovered by Jamie Lillywhite at a university talent contest. After signing with Polydor Records in July 2009, On 28 April 2013, Goulding ran the Nike Women Half Marathon in Washington D.C., clocking a time of 1:41:35.On 7 August 2018, Goulding and her fiancé, Caspar Jopling, announced their engagement; the couple married on 31 August 2019 at York Minster Cathedral in England.

Goulding has spoken several times about her experience with mental health conditions. In 2016, she discussed panic attacks caused by the studio environment, which prevented her from working.In 2017, she opened up about ongoing trust issues and severe anxiety she had experienced. On the occasion, she also revealed that a fitness and boxing regime at the gym had helped her overcome them.

A Labour Party supporter, she came out in favour of the UK remaining in the European Union ahead of the 2016 referendum.In the aftermath of the result in favour of the UK leaving the European Union, she expressed her disappointment on Twitter, writing: ‘I truly believe this is one of the most devastating things that has happened in my life recorded her first EP, ‘An Introduction to Ellie Goulding’, in the same year.

Ellie Goulding’s first albumIn 2010, Ellie Goulding released her first album, entitled ‘Lights’, which debuted at number one on the UK Albums Chart. Her cover of Elton John’s ‘Your Song’ reached number two in the UK in December 2010. Ellie Goulding then performed the song on 29 April 2011 at Prince William and Kate Middleton’s wedding party at Buckingham Palace.

On 19 September 2011, Ellie Goulding was chosen to open for Katy Perry on her “California Dreams Tour”, replacing Jessie J, who had injured her foot. Her second album, ‘Halcyon’, was released in October 2012, preceded by the single ‘Anything Could Happen’. The album debuted at number two in the UK charts and, after 65 weeks, reached number one.

“Halcyon Days”, the re-release of Halcyon, was released on 23 August 2013 and contains new songs, including “Burn”, which became her first number one single in the UK (later becoming the best-selling female single of the year) and Italy. Ellie Goulding’s songs contributed to the soundtracks of the films “Hunger Games: The Girl on Fire” (with the track Mirror), and the following year to “Divergent”, with the song Beating Heart.

In 2015, he composed “Love Me Like You Do” for the Fifty Shades of Grey soundtrack, which reached number one on the official UK charts and also topped the iTunes Store’s best-selling singles chart in thirty-three countries. In the same year, she also guest-starred in fellow singer Taylor Swift’s video clip Bad Blood. On 17 September 2015, she released “On My Mind”, the lead single from the album “Delirium”, which was released on 6 November.