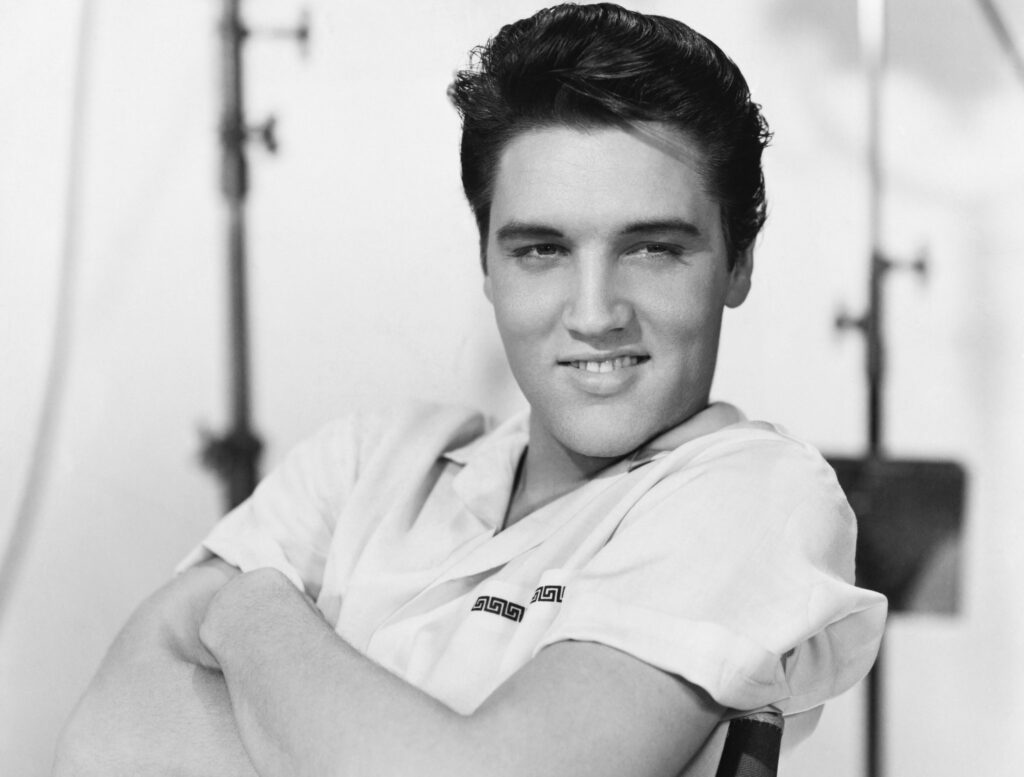 This is Biography Elvis Presley was born on 8 January 1935, under the sign of Capricorn, in a small house in Tupelo, Mississippi, the rock legend was born: his name was Elvis Aaron Presley. His childhood was poor and difficult: when he was only six years old – according to the legend – Elvis was desperate for a bicycle that unfortunately (or fortunately) was very expensive, so his mother Gladys decided to give him for his birthday a guitar found in a second-hand shop worth 12 dollars and 95 cents.

This gesture gave Elvis a passion for the six-string and for music, so much so that he would spend hours listening to gospel and spirituals sung in the little church near his home.At the age of 13, he moved with his family to Memphis, where he attended the city’s area of greatest black culture. In the United States something is about to happen, the conformism and morality of the old generations are beginning to crack, nothing better for a young white boy who proposes music and eccentricity as a black man.

Sam Phillips, of Sun Records, heard an Elvis song in a stairwell and was struck by it; he paid four dollars and signed his first contract with Presley: a small investment for a real golden goose. At the beginning of his career, on April 3, 1956, Elvis took part in one of the most watched TV shows, the Milton Berle Show; 40 million spectators enthusiastically watched his performances, but the millions were really a lot when it came to his earnings and the size of his record sales.The cinema also dealt with Elvis: he went on to make 33 films.

The first one also launched the memorable “Love me tender” which made Presley love his deep and terribly romantic voice. Elvis “the Pelvis”, as his fans called him because of his pirouetting pelvic movements, at the height of his career seemed an everlasting myth: everywhere young girls went crazy, ready to throw hysterical screams and underwear; the chronicles of those years tell of a police in perpetual difficulty to guarantee Elvis’ safety after every concert until he was able to return safe and sound to his Graceland, a colonial building in Memphis surrounded by a large park.

From an old deconsecrated church, Graceland was transformed into his palace: architects spent a few million dollars to create a royal palace, worthy of a king and still a popular tourist destination. Elvis never hid his naive side as a child who had never grown up, so much so that one day he said: “When I was a kid I was a dreamer; I’d read a comic book and become the hero of that comic book, I’d see a movie and become the hero of that movie; everything I dreamed became 100 times more real”.

On March 24, 1958, he was enlisted and sent to a training centre in Texas with the serial number US53310761; an anomalous military service, under the constant presence of journalists, photographers and young fans who besieged his every free exit; he was discharged on March 5, 1960, returned to the stage and sang a duet with Frank Sinatra in “Welcome Home Elvis”.

The death of his mother Gladys was a blow to his emotional balance: the strong bond abruptly severed became the cause of discomfort and anxiety. One day, he met a 14-year-old girl, Priscilla, daughter of an American air force captain attached to the NATO forces stationed in Germany. It was love at first sight and on 1 May 1967 it became a marriage. Exactly 9 months later, on 1 February 1968, Lisa Marie (who would marry the King of Pop, Michael Jackson) was born.

After an eight-year absence from the stage, in 1968 Elvis returned to live concerts with the show “Elvis the special Comeback”: he returned dressed in black leather with the same charisma and energy that had characterised and captivated generations during the previous decade.

In 1973, he entered the history of television and entertainment with “Aloha from Hawaii via satellite”, a special that was broadcast in 40 countries and reached more than a billion viewers. On 12 February 1977, he began a new tour that ended on 26 June. Deciding to take some time off, he returned to his home in Memphis. It was a day in the middle of summer when he was rushed to Baptist Memorial Hospital; the doctors declared him dead of cardiac arrhythmia: it was 3.30 p.m. on 16 August 1977.Today, there are countless tributes to Elvis Presley and, as befits a true legend, anyone can be sure that his legend will never die.