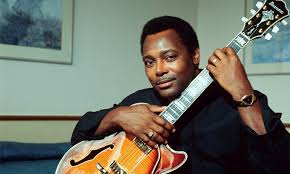 This is Biography George Benson was born on 22 March 1943 in Pittsburgh, Pennsylvania (U.S.A.), and is simply one of the greatest guitarists in the history of Jazz and R&B (some music critics and magazines consider him the best ever), his gift and technique in solo playing can be described as a beautifully rounded sound that blends with the impressive speed he imparts in playing it, a wonderful sense of logic in the musical construction of the solos.

Great singer, he has a beautiful 3/octave voice, which moves with ease from Swing to Jazz, from R&B to Soul to Pop, George Benson has been quoted as saying that his musical mentors were guitarists Charlie Christian and Wes Montgomery, but his guitar playing style is entirely of his own making, Benson showed prodigious talent as a child when at the age of four he won a singing competition and began a brief career as a radio DJ under the name ‘Little Georgie Benson’.

At the age of eight, he began playing guitar, but it was as a singer that he worked hard to hone his voice, performing R&B songs in black music venues and on the streets of Pittsburgh. At the age of ten, he was spotted by a talent scout, and in 1950 he made his first recording with the song ‘She Makes Me Mad’ for the small RCA subsidiary ‘Victor X Records’, in the meantime, his stepfather encouraged him to express himself more musically by building him an electric guitar and giving him the Ukulele (a type of guitar built and typical of the Hawaiian Islands).

Jazz singer Eddie Jefferson influenced his singing. Later, listening to innovative recordings by saxophonist Charlie Parker and guitarist Grant Green, his interest in jazz increased, his big break came in 1961 when he joined organist Jack McDuff’s band as a guitarist, Benson and McDuff toured all over the United States until 1965 when he left McDuff to form his own jazz quartet and record his first albums: 1965’s “The New Boss Guitar”, 1966’s “It’s Uptown” and 1966’s “The George Benson Cookbook”.In 1965 she married Johnnie: the longevity of this marriage is a rare example in show business.

The couple had seven children, but sadly three died: Robert while still in a cradle; Keith was killed in 1991 with a blow to the head in a music venue; in 1997 George Junior died of kidney failure, George Benson is known as a sweet and expansive man with a very strong character, leading a very private life outside the music world, The religion he follows with faith and passion is that of Jehovah’s Witnesses.

In addition to singing and playing electric guitar with his band, he played as a sideman for jazz masters such as Ron Carter, Billy Cobham, Miles Davis, Herbie Hancock, Freddie Hubbard, and Lee Morgan, and when he was chosen as the guitarist on Miles Davis’ album “Miles Davis in the Sky”, he signed a contract with Columbia Records. In 1967, he switched to the Verve label and recorded his first album as a singer and lead guitarist, entitled “Benson Burner”, although his singing is considered unremarkable, his guitar solos are hailed by critics as ‘the work of a promising new jazz guitarist’. Benson began working with producer Creed Taylor, with the A & M Records label, which merged in 1970 with the new CTI record label.

In 1971 he recorded two new albums, “Beyond the Blue Horizon” and “White Rabbit”, which were very well received by the critics. From 1973 to 1975 he recorded other albums entitled “Body Talk” and “Bad Benson”. Benson wanted to be autonomous in searching for new musical and vocal melodies (autonomy that he didn’t get under producer Creed Taylor), so he moved to Warner Bros Record where he met producer Tommy LiPuma. With LiPuma, he developed his own style of singing, which is scat: a way of singing with a line identical to the melodic line played by the guitar (George Benson, being a great vocalist, imitates with his voice the sound he is making with his guitar).

Thanks to his innovative way of singing, he gained the admiration of many fans and music critics, revolutionizing the jazz genre. In 1976, he released an album with Warner Bros entitled “Breezin”, which included the hit “This Masquerade”, selling four million copies and winning three Grammy Awards.

Moving on to Warner Bros Record, he changed the type and brand of his guitar, switching from Gibson (used for eleven years) to Ibanez, where he also became a partner – shareholder of the famous Japanese company that produces it, and had the famous Ibanez George Benson “Model Ibanez GB10 and Model Ibanez GB200” guitars built to his specifications, which he personalised with some acoustic and sound modifications.

In 1977, in the recording studio, he recorded one of his best albums, “Weekend in L.A.”, which included the song “On Broadway”, which won a Grammy Award for Best Male Vocal Performance in the R&B genre. In 1979, the song “On Broadway” was included in the soundtrack (nominated for an Oscar) for the film “All That Jazz”, directed by Bob Fosse and winner of four Academy Awards. In the same year, he released the double album ‘Livin’ Inside Your Love’. In 1980, he entered the dance music market with the beautiful album “Give Me the Night”, produced by Quincy Jones, which won him three more Grammy Awards.

In the 1980s he was unfairly criticised for temporarily leaving out jazz to sing and play more commercial (but high-quality) music. George Benson proves the contrary by winning a Grammy Award “For Best Instrumental Performance in the Pop Genre” with the song “Being With You” from the 1983 album “In Your Eyes”. The following year (1984) he recorded the album “20/20”, in 1986 “While The City Sleeps” and in 1988 “Twice The Love”. In 1987, he and guitarist Earl Klugh recorded the album “Collaboration”, in 1989 “Tenderly” and in 1990 “Big Boss Band”, which satisfied jazz fans. At the beginning of the 1990s he released two albums: in 1992 “The Essence of George Benson”, and in 1993 the sophisticated and sophisticated “Love Remebers”.

In 1996 he returns with “Thats Rights”, with nine musical and vocal tracks (song No. 7 is entitled “Johnnie Lee” and is dedicated to his wife). In 1998 he recorded the album “Standing Together”, produced by the new Grp/Verve label. In 2000, with class and elegance, he released a new album entitled “Absolute Benson”, and with the same title he released a DVD recording the concert in Dublin. On 29 May 2001 he was invited to Italy (in the city of Modena) by the great tenor Luciano Pavarotti to take part in “Pavarotti & Friends for Afghanistan”.

In 2003 he adapted to the new musical trends of the new millennium, always maintaining his distinctive style with the album “Irreplaceable”. In 2006, he changed record company again, switching to Concord Record; in the same year, George Benson & Al Jarreau collaborated together to record the cult album entitled “Givin’ It Up”. Benson interpreted some of Al Jarreau’s famous songs, and Al Jarreau sang Benson’s best songs in vocalist style, both achieving exceptional results, winning two Grammy Awards each out of three nominations.

In 2008, he participated for the first time in the Mawazine Festival in Morocco; then the guitar company Ibanez, to celebrate 30 years of collaboration with George Benson, created the GB30TH, a limited edition model finished with gold foil. In the same year, he was awarded the ‘Nea Jazz Master’ as the best only instrumentalist, the most important award in the jazz music genre worldwide. He received the same award in 2010, and in 2009 he returned with the extraordinary album ‘Song and Stories’.

In 2011 (as was the case in Morocco) he gave a concert in Israel for the first time, and returned to the jazz genre by recording an album entitled “Guitar Man”. From 1965 to 2012, he released over 160 albums and sold over 250 million copies. For his contribution to the recording industry, he has a star on the Hollywood Walk of Fame at 7055 Hollywood Boulevard.

1994 – The Most Exciting New Guitarist on the Jazz Scene