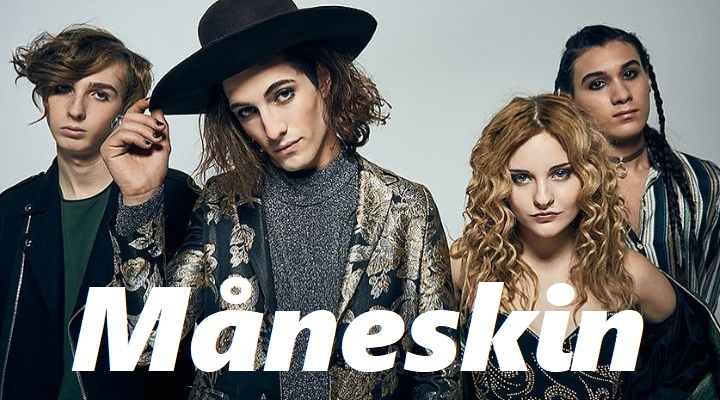 This is Biography Maneskin is a band with a look and sound capable of winning over Italian and international audiences. The members of Maneskin have become well-known faces to the general public, thanks to their consecration on the X Factor stage (11th edition, broadcast from 14 September to 14 December 2017). This musical group, born in Rome in 2015, has achieved extraordinary success in the space of a few years. Victoria De Angelis and Thomas Raggi, bassist and guitarist respectively of Maneskin, have known each other since they both attended the same secondary school. Although they knew of each other’s passions for music, they only became close in August 2015 and decided to start the band. The group was joined later by singer Damiano David; thanks to an announcement posted on Facebook, the line-up can be considered complete when drummer Ethan Torchio arrives. Among the most important curiosities about the group is the choice of name. One of the most important curiosities about the band is the choice of name, which is of Danish derivation (the correct name is spelled like this: Måneskin, with the å being read with an intermediate sound between the Latin a and o). This is the language of origin of the bass player Victoria (aka Vic De Angelis), who chooses an expression in her native language, which can be translated into Italian as “moonlight”, to welcome a project in which she strongly believes. Maneskin: the launch thanks to X-Factor 2017 After two years of work to find their own style, in 2017 they successfully passed the selections for the eleventh edition of X-Factor. They thus took part in the evening episodes of the talent show, coming in second place, also thanks to the choices of judge Manuel Agnelli. Thanks to their excellent placement, Maneskin release Chosen, an album that contains a single of the same name. In March, they released their second single: Morirò Da Re ( I will die a king). In June, they made their debut in front of an audience as large as the Wind Music Awards, where their work was recognized with two awards for the album Chosen. A few days later they performed at RadioItaliaLive the concert and at the Wind Summer Festival. Another big live date sees them open the Milan date of the Imagine Dragons concert on 6 September 2018. Towards the end of September 2018, the single Torna a casa is released, which proves to be a huge hit right from the first passages on the radio. It is also the first single released by Maneskin to manage to reach the top of the FIMI (Federazione Industria Musicale Italiana) (Italian Federation of the Music Industry) singles chart. In October, the musicians returned to the stage that had made them so successful: they played during the first live evening of X-Factor 12. In the same month, their first studio album, Il Ballo Della Vita ( The Dance of Life), was released. The same month, their first studio album, Il Ballo di vita, was released. The band’s innovative approach, oriented towards capturing international trends, was evident on the promotional level, and they chose to show a docufilm in selected Italian cinemas, which was well received. The album is followed by an international tour, which starts in November 2018 and sells out at every stage. The excellent response leads the group to increase the number of dates, extending the tour to the following summer. In January 2019, the third single taken from the album is released at Sanremo 2021. The title is Fear for nobody. It is followed three months later by the release of L’altra Dimensione (Dimensions). The call of the public is much stronger than that of the studio for the band. That’s why they continue to devote themselves with a passion to the European tour dates, which continue until September. In this period, the video for Le parole Lontane ( Distant) (The faraway words) was released, the last song from the album, which was destined to become an immediate success, also in terms of trends on video content platforms. This confirmation was particularly important for Maneskin, as the song was one of those that best represented their artistic vision. The following year, immediately after the release of their new single, Vent’anni, their presence in the list of participants at the Sanremo Festival 2021 was announced. On the Ariston stage, the band presented a song with a striking title: Zitti e Buoni (Quiet and quiet). The Sanremo victory sends them straight to the Eurovision Song Contest: on the night of 23 May 2021, Europe’s votes give Italy a historic victory. Before them, only Gigliola Cinquetti, in 1964, and Toto Cutugno, in 1990, had won for Italy.